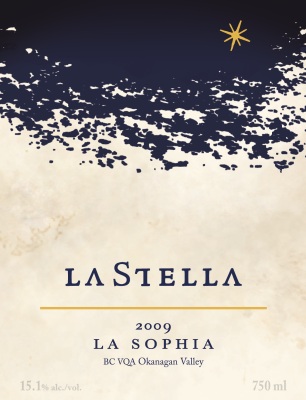 Unlike 2008 (a long and cool growing season), the 2009 vintage was hot from the get go with the sun shining until the early frost in the second week of October. The resulting wines show ripe fruit, round acidity, slightly higher alcohol levels and all the other characteristics associated with a warm vintage.

In Okanagan Valley Cabernet Sauvignon rarely achieves a level of physiological ripeness that allows it to stand on its own feet rather than play a supporting role for Merlot or Cabernet Franc. The warmth of the 2009 vintage, however, allowed us to do just that!

La Sophia is akin to the great examples of Cabernet Sauvignon from the coastal areas of Tuscany: Maremma and Bolgheri. Similarly La Sophia draws comparison to great cabernets from Washington State rather than the plusher and fatter examples from Napa Valley.

La Sophia presents a great nose of cassis and cigar box mixed with pain grille and smoked prosciutto. On the palate there is great weight, firm and present tannins with balanced levels of acidity.
We are very excited to follow the development of this wine as it ages in the bottle.

The tannins are firmer and the acidity is higher than our Merlots. As a result the wine benefits from pairing with fattier cuts of meat and dishes that are  higher in acidity.

A stunning Cabernet Sauvignon that grips your attention from the first sniff of sweet, concentrated dark berry fruit and deep licorice aromas. The truly gorgeous palate follows with a near perfect balance between the ripe, silky tannins, elegant texture and smooth acidity.

Complex, captivating and feminine this beautiful Cabernet should last and evolve over a decade yet is tasting very well today. Drink 2012-2019.

Merry Christmas ! We wish you and your cherished

Meet Rasoul! Discover a little bit more about our

Holidays are coming! 🎄 It is time to think abou

You’re planning a getaway in the South Okanagan

Thank you Michael Godel (WineAlign) for this great

Are you looking forward to travelling again? 🛫

While you enjoy your turkey and ham Thanksgiving m

We are so blessed for the outstanding weather the