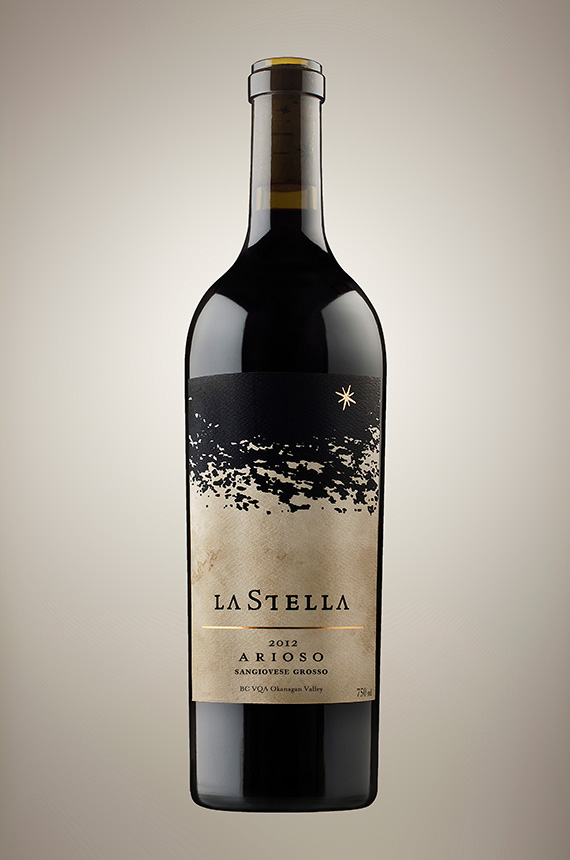 After three atypical vintages in a row, the 2012 growing season is a return to a more typical summer growing season in the South Okanagan Valley. After an initial scare of unusually high record rainfall in late spring the remainder of the growing season was an absolute dream come true. Mid July till late fall gave us very hot days combined with typical cold desert nights. Growing degree days for the South Okanagan were above average and certainly much higher than 2010 and 2011. One of the hallmarks of this vintage was extremely uniformly ripe and pristine grapes with minimal need for sorting (quite the opposite of 2008, 2010 and 2013). The resulting wines are more fruit forward with round structure thanks to plenty of sunshine and heat units; the cool nights resulted in excellent, piercing aromatics and bright acidity in the wine.

2012 marks the birth of a new wine in the LaStella family. Arioso (a melodic solo performance) is a wine comprised of 100% Sangiovese Grosso (aka Brunello). Arioso is a medium bodied, chiseled and confident wine that excites the senses and reminds the beholder why Sangiovese is considered one of the most noble of grape varieties. Notes of bing and red cherries greet you on the nose followed by rawhide leather, potpourri and wild desert flowers. On the palate the wine is linear with outstanding tension of natural acidity and rustic tannins that demand food or extended cellar time to soften. Try a bottle on or shortly after release to satisfy your curiosity and then let the remainder of your bottles tucked away in the deep, dark, cold part of your cellar for half a decade plus.

Substantial, generously fruity, sustained by the right amount of acid and some well-polished tannins. The wine is four years old, but still feels extremely young, making the presence of new oak seem fairly justified, as this seems like it could age gracefully for many more years. Worth waiting for. (June 2016 – to be officially released in September)

From Osoyoos to Osnabrück! Throwback to our Drivi

Size matters. We use a variety of medium to large

Happy Easter! Taking in the Spring time here at La

The season is a-changing and we cannot wait to wel

What is your favorite food to pair our Fortissimo

Counting down the days to summer and to your visit

What is your favourite LaStella wine? Let us know

Are you subscribed to our wine club? Be in the kno

Our Tasting Room is opening tomorrow – book an a

It's the changing of the seasons! Our estate viney

Happy International Women's day. Much love to all